Admin
Posts : 3943
Join date : 2017-07-01
Age : 31
Location : Netherlands
I generally am still disappointed about the lack of actual citizens. Arkham City did is sort of clever with its premise but in Knight it was pretty obvious they just wanted to avoid the whole situation by having the city 'evacuate completely' (sure...). I really just want to feel like I'm Batman in a city full of crime, now it just feels like this big empty space with nothing to really do.

Admin
Posts : 3943
Join date : 2017-07-01
Age : 31
Location : Netherlands
True but there you walk among the streets, which Batman generally doesn't do. But to have an entire game about rooftops would also get pretty...boring haha.

Moderator
Posts : 3554
Join date : 2017-07-02
Yeah thats a good point, that Batman never walked among civilians. Maybe we could switch to Bruce Wayne for that lol.

Admin
Posts : 3943
Join date : 2017-07-01
Age : 31
Location : Netherlands
I would love that if on the rooftops you were Batman, and that you could explore the citystreets as either Bruce Wayne or his alter-ego Matches Malone. Hell to even see Matches Malone get the love and attention the persona needs would be amazing since he's never been seen in any media outside of comics.

Long story short, Matches was a criminal Bruce got killed by accident and only he knew. So he buried him and ended up dressing up as him to blend into the criminal underworld as Matches was quite the 'character'. 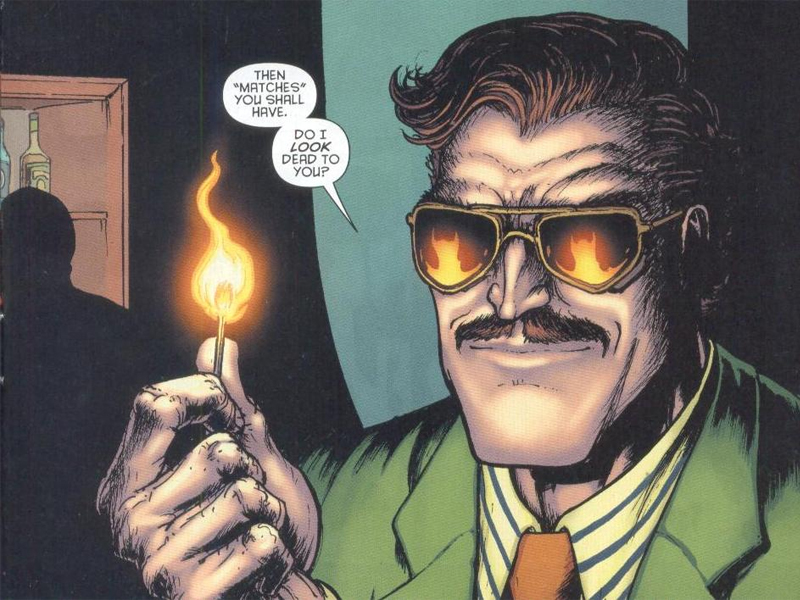 Moderator
Posts : 3554
Join date : 2017-07-02
But the game would be less of an action game if it played like this wouldn't it. There would have to be a large portion of the game as Bruce/Matches. It would become more like the Yakuza games.

S-Rank
Posts : 1130
Join date : 2017-07-29
The Bruce parts have been emulated by the tell tale batman game, not sure if other batman games have Bruce Wayne sections. Arkham city only has that brief Bruce Wayne intro part which isn't any different gameplay wise. I'm sure it could be pulled off somehow. Maybe Bruce sections would have dynamic dialogue options like alpha protocol and social stealth or something.

I can see it happening, especially with modern design trends of gameplay/story integration. I'm fine with just batman.

Moderator
Posts : 3554
Join date : 2017-07-02
One thing I did not like about the series as a whole was the boss fights. It wasn't too noticeable in City, but by the time I had gone through Origins, it was painfully noticeable.

What I mean is, they are mostly just predator encounters or scripted somehow. I was super disappointed to see that Deathstroke was largely similar to Ra's al Ghul in City, reusing some of the same animations. Two Face, Harley, and Deadshot were just glorified predator encounters. Some boss fights were ok. Everything in Asylum I consider fine as it was the first. That woman in Origins who could create multiple copies of herself was a good fight and the giant electricity guy was decent.

The system just isn't designed for 1v1 encounters though.

S-Rank
Posts : 1130
Join date : 2017-07-29
Totally agree man. Sucks so bad as batman of all series needs great boss fights. It's an absolute waste of one of the best rogues galleries of anything ever. The games still have some unique and well designed bosses when they where actually being creative. I thought killer croc, scarecrow and mr.freeze are some of the more novel ones. City has the best bosses by far, they clearly learned from asylum.

Knight is the worst in this regard it doesn't even have any proper bosses it's all either predator mode or a fight against a big black boxer boss guy who is pretty much like any other large mob you face with extra goons helping out. Killer croc is also a similar fight in a Dlc. Arkham knight boss is just an actual predator encounter where he sits up high sniping at you which is so lame and lazy for what could have been the most interesting and well designed boss to end the series.

The combat makes up for its lack of nuance with 1-1 encounters with its variety through enemy numbers and gameplay types, that's its strength.

Moderator
Posts : 3554
Join date : 2017-07-02
Yeah Mr. Freeze is great. Even though it's a predator encounter, nothing works twice on him and there are all kinds of options to deal with him. I love that fight.

S-Rank
Posts : 1130
Join date : 2017-07-29
It got too formulaic by origin and Knight was really pushing it. Still a real solid series. What does bother me somewhat is that most AAA games and such follow the basic 'I can't believe its not arkham' combat to a tea. It's that or souls basic formula. Makes me appreciate unique action games more, its pretty much take your pick so I can't complain haha.

Admin
Posts : 3943
Join date : 2017-07-01
Age : 31
Location : Netherlands
The combat in Arkham was great, though I wish there was a bit less emphasis on gadgets at times and that their use was a bit more .. well .. useful. For instance a batarang stuns or knocks down, but the gel also is a type of crowd control, and so is the electric shocker gun, and the explosives etc. It's all a bit the same in their usage. The only gadget that is an exception is the grapple which you can use to clear distances etc, which is excellent. I'd love to see a better balance here and have every move have a specific use. It doesn't need to be DMC or NG, I love the way the combat works now but some balancing is really needed.

Same with the special moves. Some offer you a single 'kill' while another can take out up to ten for the same price, and the stun is mainly just a point-builder.

EDIT: about bosses, it never works for Batman. He's too powerful for regular guys to take on one versus one in any scenario, even if you are Grundy or Clayface. I liked the Freeze and Red Hood fight the most. Origins had some really cool fights too such as the finale against Bane which was really fun and well done and same with Deathstroke which was a really fun fight to do. Origins is still my favorite out of the bunch.

Moderator
Posts : 3554
Join date : 2017-07-02
Mine is Asylum now. It was City, but only because I rushed through Asylum years ago and wasn't very good at it. All the games have some great parts and fights though.

Agree about the gadgets. Outside of combat they're useful but in combat as you said, a lot do something similar and the only reason to use them is for points, though there is still a bit more to them.

This is another reason why I like Asylum more. There aren't as many useless things and even some unique ones like the triple Batclaw that never returned. Pummel was ok in City, but not having it doesn't take away anything in Asylum. It struck me as no more than combo bloat.

I really like the special move, 'throw', in which Batman picks up a guy and throws him (obviously) but you can choose the direction and launch him into other enemies. I'm not 100% sure if you can be hit while holding them though. It's a special move so maybe not.

Really need to make a topic but I've put the game on hold for others as is my disgusting habit.

Admin
Posts : 3943
Join date : 2017-07-01
Age : 31
Location : Netherlands
I really miss his throw from Asylum too, great little move (and yeah you were fully invincible outside of hazards). The pummel from City and later is my favorite move though, it just looks so stylish and really feels like putting the beat down on any foe.

Origins is my favorite mostly because it handled the Batman origin very well, better than I ever expected it would. It showed his rage and anger at the start paired with the desire to be a lone wolf, and slowly shows him building relationships with the GCPD etc. It also had some really good gameplay moments like the infiltration of the GCPD which had an insane optional fight. Basically there was a room where guys were discussing to take down Batman. Your mission is to sneak past but you can try to fight them, it's about 20+ guys all with body armor and machine guns so unless you play perfect you are deader than dead - I always do the fight because it's just such a fun challenge.

About the gadgets, I love them in the stealth where they really add another layer. But stuff like the explosives really could've benefitted from a better usage. That said the power-gadgets from Knight (enhanced versions that drain combo-meter) are really fun and interesting. Interestingly enough Knight added a ranking system that barely worked, would've been interesting to see that expanded upon (though I believe the series is dead now, right?).

The atmosphere is so creepy and I love to explore this place.

>pummel
Aside from feeling and looks, would you say it adds much? My memory is hazy, but aren't you invincible during it? Either way, as I said, it struck me as more a combo builder than anything really unique.

Wasn't a fan of the electric or heat gauntlets either. Didn't they just add 2x per hit?

But yeah the Throw is invincible in Asylum, shame they got rid of that move. The pummel has a few good uses. For one, it cannot kill (only the final few hits can iirc). It also can be canceled and is a good combo builder to gain access to higher special moves. And yeah the Electric Gloves in Origin don't add too much, it is just a regular DT basically to skip certain fights.

Moderator
Posts : 3554
Join date : 2017-07-02
>which title
Asylum. Then I started talking about those moves from other games like pummel.

Also, Arkham's combat really gets a bit of a bad rap. Yeah, it's pretty annoying to see all the imitators, but it's pretty well-executed for what it is.

Asylum feels more concentrated, focused, and I really like the triple batclaw and throw. I love that move so much.

That's not to say the others are bad and don't have cool elements though, but I doubt I'll ever go back to them. I always think about Asylum though.