Heard a lot of good things about Ys 8's combat, but I've also heard it's quite buggy on PC. Not that I can buy it right now, because I'm flat broke.

Anyone played any of these games? Ys 8 in particular?

A-Rank
Posts : 859
Join date : 2018-12-24
I played a good chunk of Ys 8 on the switch. I ended up dropping off as I do with most jrpgs, around the 20 hour mark. It just always starts to feel like a waste of time lol. I was playing on inferno and it was brutal, almost everything can kill you in two hits. But it was rewarding.

I highly recommend Theseraphim17's video walkthrough to get an idea of the combat. He explains it perfectly within 10 minutes and he sold me on the game.

D-Rank
Posts : 34
Join date : 2020-01-12
I've played Ys 8 and surprisingly loved it, I didn't expect it to be that good. The combat system may not be the most technical but it works really well and has some great skill-based mechanics that accompany all the RPG stuff (which is great, too). Tons of bosses, as well, and I particularly liked one of the post-game ones. The level design is more interesting than it seems at first, and the same goes with the story which really picks up halfway through. The music is also really good. The game is also really long (50 hours to 100%, maybe a bit less but there is a boss rush mode which is super cool) but it never gets boring.

I had tried Ys Napishtim and Felghana before, but never enjoyed them that much. The new formula on the other hand is amazing imo. Some die-hard fans complain that modern Ys games are less hardcore than what the series used to be, and it's probably true, but there are several difficulty modes and from Hard onwards the game can provide a good challenge (wouldn't recommend the absolute hardest tho, because it can force you to grind to deal proper damage).

Now I'm eager to play Ys Seven and Ys: Memories of Celceta, which are the precursors of this new Ys formula, and I'm looking forward to Ys 9 coming to the west.

Might grab the one for PS4 if I can find it cheap. 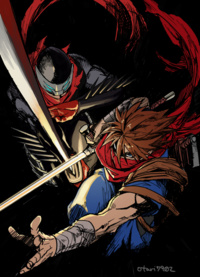 D-Rank
Posts : 28
Join date : 2020-06-08
Age : 30
Location : Finland
A friend recommended me to play through Ys 8 on the highest difficulty mainly because it makes enemy attack animations faster. I ended up agreeing since a lot of the core mechanics are waiting for enemy actions to perfect parry/evade etc. I thought it was an excellent game apart from the core system allowing you to constantly be in parry invincibility being sorta cheesy and one-sided by the end (limiting what else the combat could be). I know this system is shared in ys 7, celceta, ys 9.. if you play one of these I would highly recommend 8, since the others might feel repetitive after.
The added 'dungeon' areas you do as another playable character were easily strongest point for me, though ironically that's the bit that is closer in structure to older games. I don't think you really need to grind in this particular game, maybe only a couple levels for the last few bosses.

The PC version of Ys 8 got a massive patch at the start of this year that made it from an awful port into an excellent one and best way to play afaik. Well optimized too.

Felghana and Origin are definitely more hardcore and action focused games. More focused boss fight combat as its more about classic movement, weapon switching and figuring out varied boss attacks. Instead of a constant iframes / universal parry spam in Ys 8 kind of solving everything with less normal action game aspects.

Of the original games Ys I&II and Ys IV (PC engine CD, Hudson) are a solid action rpg romp too imo, many parts still hold up. Not sure what birdman meant by highly customizable. Falcoms Ys series is known for being super straight forward action RPGs with little focus/distraction from the rpg part. Ys 8 does have a lot of attack skills you can equip on characters. This game became sort of an exception being closer to a JRPG in length and a couple other aspects but pulls that change off very well.

I didn't enjoy the perfect guard/evade mechanics at all. Correct me if I'm wrong, but it's the only way do real damage right?

I got more enjoyment perfectly spacing my strikes rather than baiting moves for perfect guard/dodge.

I recommend trying out Ys: The Oath in Felghana, that fits your description much better and is a streamlined action game with little filler. Ys Origin has even less as there are very few story sections.

SSS-Rank
Posts : 4683
Join date : 2017-07-02
The enemies and your own moves all have unique properties but the perfect stuff pretty much deletes it from what I've seen.

>other Ys
Will look into it.

The combat is what people refer to as "bump combat"; There's not actually an attack button, it's about running into enemies at an angle. The catch is, that if you attack them head-on, as opposed to off-center (In other words, making sure that Adol, your guy doesn't line up with the enemy sprite), you also take damage. Seems to be a highly enemy-centric combat system.

Hitting enemies into obstacles like rocks, or trees allows you to score really long combos (Not the DMC kind, just the type where you get a lot of hits off in a row) on them. A bit risky though, since you can accidentally center yourself, and then your chain can be broken.

I've found it to be a bit fiddly, but I'm not very good at it so far.

As for game progress: Beat the first boss Jenocres. Dude teleports around the room while shooting a repeating pattern of flames that goes from top-to-bottom in the room. He was really tough, until I levelled up once, and proceeded to stomp him. I've also run into another wall with these lion-looking enemies that block your attacks from the front; I'm not sure how I can attack them from the sides, or from behind.

SSS-Rank
Posts : 4683
Join date : 2017-07-02
>The combat is what people refer to as "bump combat"; There's not actually an attack button, it's about running into enemies at an angle. The catch is, that if you attack them head-on, as opposed to off-center (In other words, making sure that Adol, your guy doesn't line up with the enemy sprite), you also take damage. Seems to be a highly enemy-centric combat system.

Never heard of such a system. Sounds really unique.

C-Rank
Posts : 151
Join date : 2018-10-28
>Correct me if I'm wrong, but it's the only way do real damage right?
It's the only way to not get oneshot on higher settings, so yeah you have to rely on it on nightmare/inferno. Celceta had Napalm Strike which made the dodge/shield optional but no one really has high range on 8 and the skills that can cause hitstun are rare.

>I got more enjoyment perfectly spacing my strikes rather than baiting moves for perfect guard/dodge.
You dont really bait anything, you just zerg stuff and parry when needed, they're really fast in animation so it's not like the game is forcing you to play passively, recent ys us agressive as it gets.