Admin
Posts : 5465
Join date : 2017-07-01
Age : 33
Location : Netherlands
So if there's one thing we see a lot of times in games in the Action Genre it is how RPG-mechanics are shoved in without much thought, influencing the systems greatly. We've seen it carry Souls as a series and hold back its Bloodborne title by forcing it in when it wasn't needed at all. It impacted Nier: Tomato, influenced Transformers: Devestation, Fist of the North Star, God of War and many more. Nioh was especially hit, changing a potential Ninja Gaiden spin-off with a fantastic stance-mechanic into a grind for higher stats to turn 10 minute boss fights into 2 second power-fantasies.

For reasons on why RPG mechanics in action games tend to be a bad mix, read here:
http://www.stingermagazine.com/2017/10/should-every-action-title-add-rpg.html

Now I want to showcase a recent game that - completely unexpectatly - did RPG mechanics right in a non-RPG title. Super Smash Brothers Ultimate.

Yes, I didn't see it coming either. Now to note, the RPG system is only really relevant in the game's story mode "World of Light".
You can enable them in multiplayer as well, but it is an option and rarely used or seen.
How does it work?

If you want text, there's a write-up by me below. Otherwise here's an official video that gives a bit of a run-down:

There are three elements, your character, your Primary Spirit and your Support Spirits.
Your character is simply that, the fighter you choose to use.

The Primary Spirit is a character that gives you 'power' so to speak. It has a defense and offense stat that have a minor influence on the game. If your defence stat is lower than that of the enemy's offence stat, you take bonus damage and vice versa. If your total stat (defence + offence) is lower than that of the foe their AI is increased proportionally. So stats mostly play into how hard the CPU is. The Primary also can give a minor buff, and if he's from the same series as your fighter you get a minor stat boost. For instance having the Bison Primary while using Ryu, gives you a nice 10% bonus.

Then there's the Support Spirits. The Primary Spirit dictates how many Support Slots you have, maximum being three. Some Primaries only have 1 slot but huge stats, or three slots but a negative modifier (taking bonus fire damage for instance). The supports can vary wildly, some take up one slot and give you bonus damage on for instance a Neutral Special attack. Others give bonus PSI damage (Lucas and Ness only), or increase Jump height or let you start with a certain item. Others take up two slots but give you a big bonus like an auto heal if you take too much damage or a third jump, while some even take up three slots.

The beauty of the system is that fights in the story mode have weird things going on, which spirits can solve. There's a fight where the floor is on fire, so you can equip a "decrease fire damage" support, or a stage where the enemy is of Metal constantly, where equipping the "Metal Slayer" support helps out. You can build a lot of mechanics around this, focusing for instance on a Captain Falcon that has a ton of buffs to his Falcon Punch - but can't offer a slot to negate stage-hazards. You can also negate your setup to negeta stage-hazards if you wish.

There's a ton of fun optiosn to toy around with, without going too overboard and making it so that stats win you the match. Instead spirits can be leveled to increase their potency (stats) to lower enemy AI, or even evolved to new forms with different slots or bonusses. It is a really fun system and I'd love to see something like this in an action-game, I think it would work so insanely well.

Here's an example of a spirit screen: 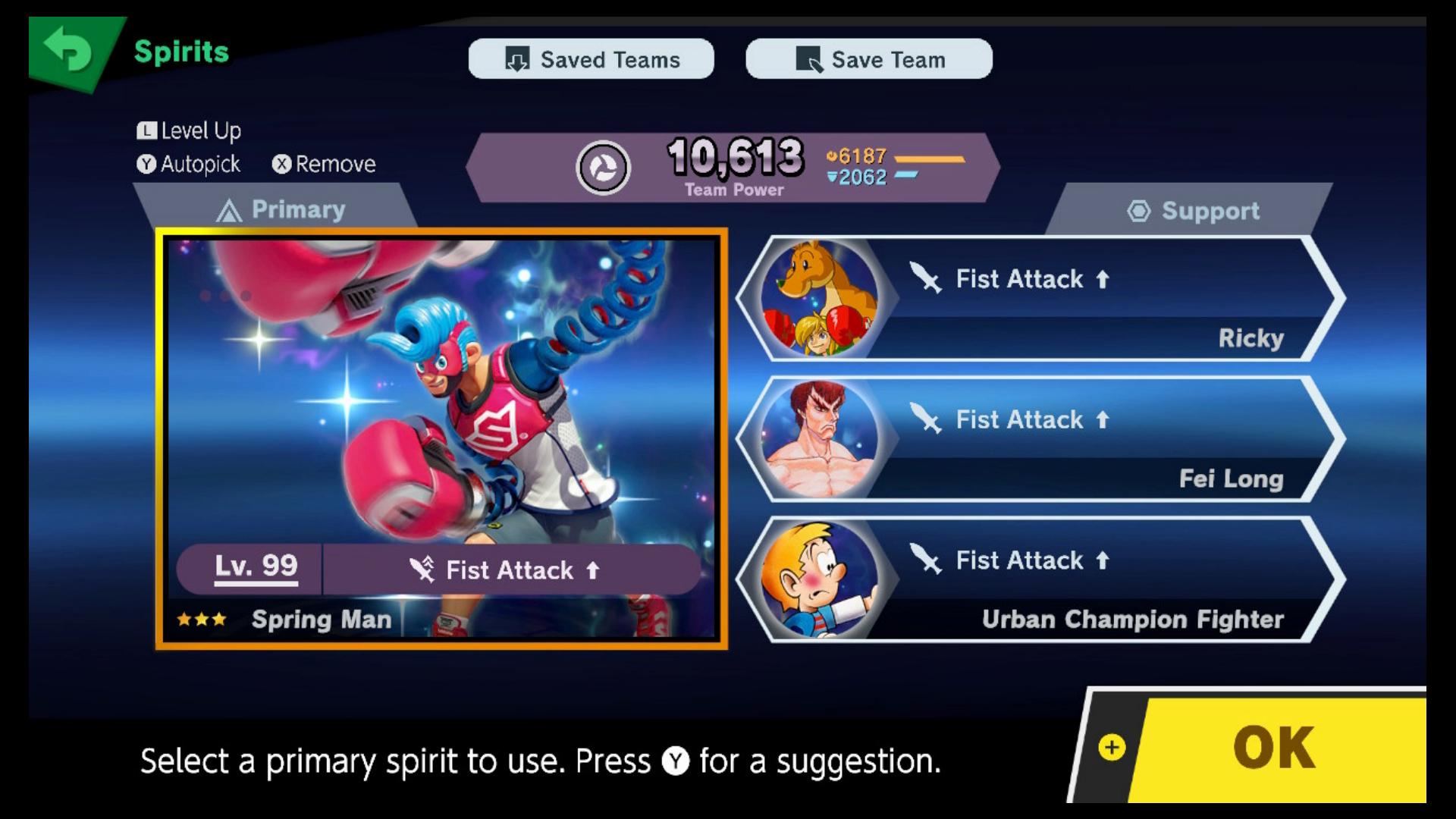 This setup is pretty great, he's got 4 times "+fist attack" which could work fantastically for Captain Falcon or for instance Little Mac. But it also leaves you vulnerable since you don't have other more utility buffs or ones that negate stage-hazards. Meanwhile the Primary also has a very low defence stat, meaning you'll take a lot of damage. Its total stat noted above is 10.000, late-game fights have enemies with around 13.000 for instance so he is at an disadvantage, meaning smarter enemies.

SSS-Rank
Posts : 4688
Join date : 2017-07-02
I'll watch the videos tomorrow. From what you've described, the mechanics sound really interesting. It sounds like the kind of system I'd enjoy.

I can definitely say where I feel RPG mechanics go wrong, though this is just me personally, and that's when stats, solely, decide your victory.

I know some people like this; grinding and gaining ultimate power for the huge amount of work they put in. That's totally fine.

I like to take them case by case though. I'll play a game with the 'bad' type if the mechanics are fun and interesting.

Take FF World. Sure, you will eventually overpower everything in the game (not sure about end game super dungeons yet) and there are setups that deal insane damage, but you don't have to use them and there's a lot of customization with how many monsters you can make stacks with.

Nioh was pretty bad for me. Even though it offered the great mechanics and build customization, the grind to get there was so bad for me I couldn't do it. I'll probably be all in for the sequel though.

Ni no Kuni 2 has some cool mechanics (higgledies) that are overshadowed by raw weapon attack power. There are like two OP set ups, one of which actually suits my play-style, but you don't have to use those.

Sadly, even when you don't, other setups are pretty weak and don't accomplish anything. Take this example.

The desert. All fire enemies. Weak against water.
I made an all water team. These higgledies can imbue your weapon with the water element, and cast water magic.

None of it had any impact. Barely did damage, yet my non-elemental weapons did, simply because they had high raw attack power.

Elemental higgledies usually have an ability that protects you from their element. So taking the water ones to the desert meant they'd cast protection against water, not fire. You have to take fire ones for that. What?

Those do have an ability where they create a large area that nullifies fire when you're within it, but like weapons, armor does a better job and is permanently active.

It's hard for me to say where they go right. Again, case by case, but sometimes I can give a pass to games like the ones I've mentioned because they offer a toolbox of options that are fun to mess around with.

TFD did not need them. You level up from fighting, but you can also boost your stats further by using credits, where you just sit there boosting stats until the meter is full and the stat reaches max. Dumb.

Then add SS rank weapons and everything is dead in a few hits on the highest difficulty.

I only use D rank weapons and never purchase stats, otherwise there's no point playing. I will say that synthesizing is alright. You can add different attributes to slots so there's some customization.

» Mechanics you found interesting in a game you didn't like
» Horse riding mechanics
» Action games with cutting mechanics.
» I miss games having discovery in their mechanics
» Lollipop Chainsaw Combat Mechanics