Directed by Hidetaka Miyazaki, Sekiro: Shadows Die Twice is a third-person, action-adventure game with RPG elements. The single-player game puts players in the protagonist role of a hard-hearted warrior whose mission is to rescue his master, a young lord, and exact revenge on his arch nemesis. As “Sekiro,” or the “one-armed wolf,” players will discover the many ways to strategically approach combat and engage enemies.
“Collaborating with Activision on Sekiro: Shadows Die Twice has been a very exciting experience for us,” said Hidetaka Miyazaki, president and game director at FromSoftware. “With Sekiro: Shadows Die Twicemany FromSoftware team members, including myself, are thrilled to be exploring themes of Sengoku Japan and ninja for the first time. We can’t wait for everyone to discover what’s in store for the game.” Fans of FromSoftware will find familiarity in the gritty gameplay found in Sekiro: Shadows Die Twice where combat reigns supreme. Players will enjoy combining new features, such as vertical traversal, with visceral head-to-head battle to fulfill their destiny in a vast world filled with beautiful vistas, enormous castles, bizarre weaponry, and fearsome enemies.
“From Dark Souls to Bloodborne, FromSoftware has established a level of excellence that stands by itself in our industry, and we are incredibly honored to work with them in bringing Sekiro: Shadows Die Twice to fans worldwide,” said Steve Young, Chief Revenue Officer at Activision. “Sekiro: Shadows Die Twice will not only add a new and exciting genre to Activision’s portfolio, but will also give players an experience that’s unlike any other FromSoftware game to date.”

C-Rank
Posts : 112
Join date : 2018-05-31
Age : 25
Location : Pennsylvania
Game looks sick! Being able to jump around and grapple things in the environment should put a really cool spin on combat. I would like to see From try something radically different from the Souls formula to be honest, but I'm super excited for this nonetheless. Hopefully we have another Miyazaki classic on our hands.

Admin
Posts : 5465
Join date : 2017-07-01
Age : 33
Location : Netherlands
Really curious how the Stamina mechanic will play into it, if at all; would be interesting if they ditched it. Apparently one of the earlier leaks had some extra information, such as Trick Weapons being back and us being able to change up the mode that allows us to transform our hand into tools.

SSS-Rank
Posts : 4688
Join date : 2017-07-02
Read something about a play dead mechanic. Sounds interesting. You could do something like that in RE Outbreak.

Though I can see this as being more of a novelty than anything else. Also looks like it's a real action game. No multiplayer, no character creation. Weird how people seem to have forgotten what single player action games are and still think this is a Souls game.

What do you think?


"Sekiro is not an RPG. There are no stats to level up and no armor or weapons to collect and equip. There are no classes to choose from. There is no multiplayer of any kind. You'll have no souls to reclaim after dying, and—from the looks of it—no checkpoint bonfires to kindle."

Souls fans are on suicide watch, kind of delicious. They are already crying foul and boycotting it. Saying that without builds and PvP "why should I replay the game then...".

Also, Stamina is gone in favor of Posture:


While there's still HP, combat revolves around 'posture.' When you attack an enemy, they'll easily block your attack but will lose posture each time. Once lowered enough, they'll be open to a gory finishing move, but the same goes for you. As enemies attack, blocking lowers your posture unless you block perfectly (similar to parrying in Dark Souls). With a perfect block you'll actually throw the enemy off balance and lower their posture instead.

Sounds similar to a take on the Ki system from Nioh on how you could see the block-stamina they had left to defend against your attacks.

It's like they don't know From's history. I was a From fan long before Souls shit and they had a few weird action games.

C-Rank
Posts : 112
Join date : 2018-05-31
Age : 25
Location : Pennsylvania
lol at Souls fans being scared of Sekiro. These are also the people who think Bloodborne is way too fast. I thought these people relished difficulty? Anyway all the little increased traversal moves will add a lot of layers to the game, which was what the souls series needed. It started to become a little too samey near the end.

Speaking of Nioh, I just bought the complete edition! Excited to finally give it a try. 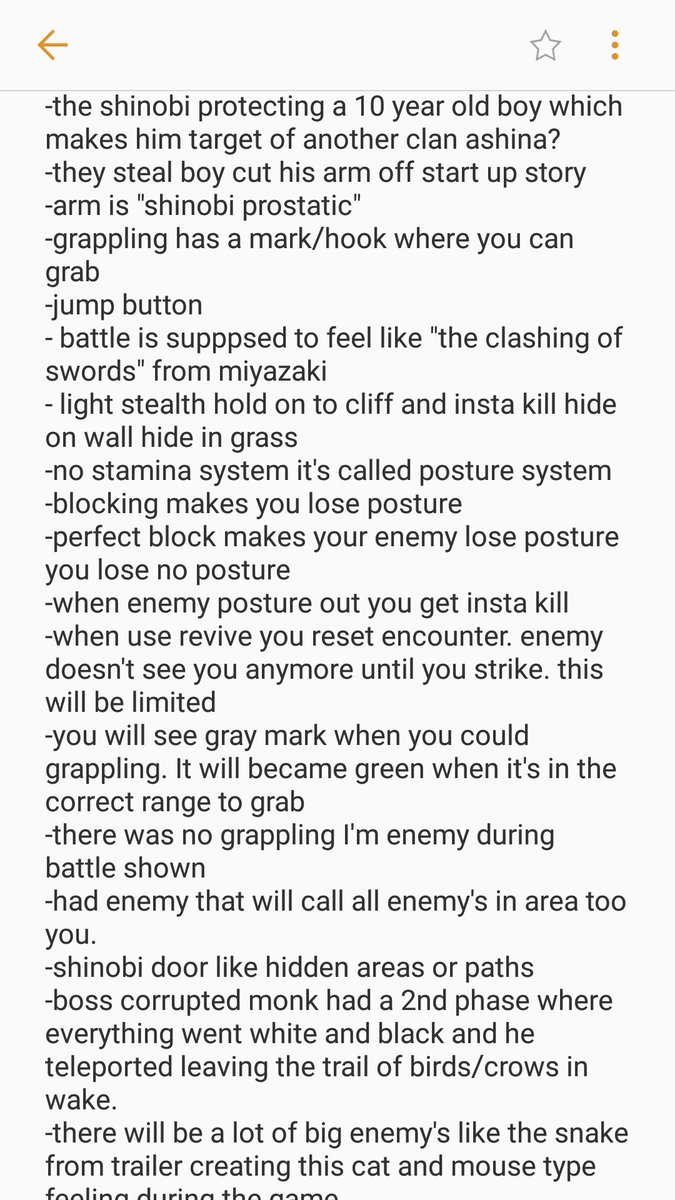 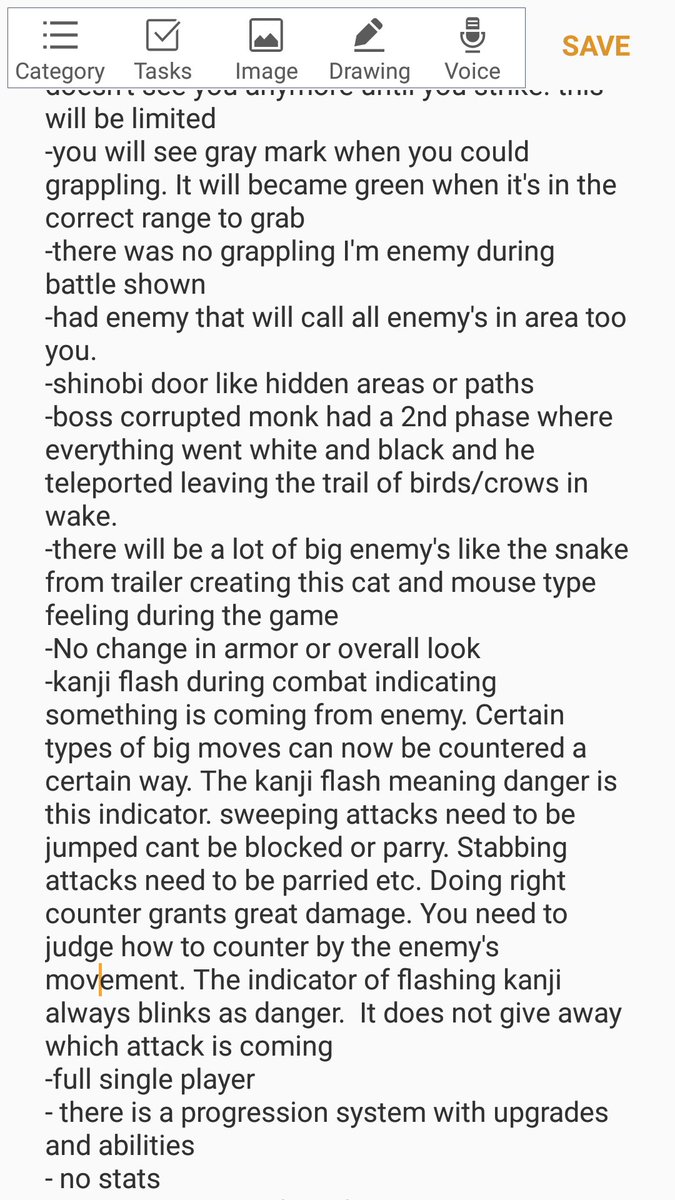 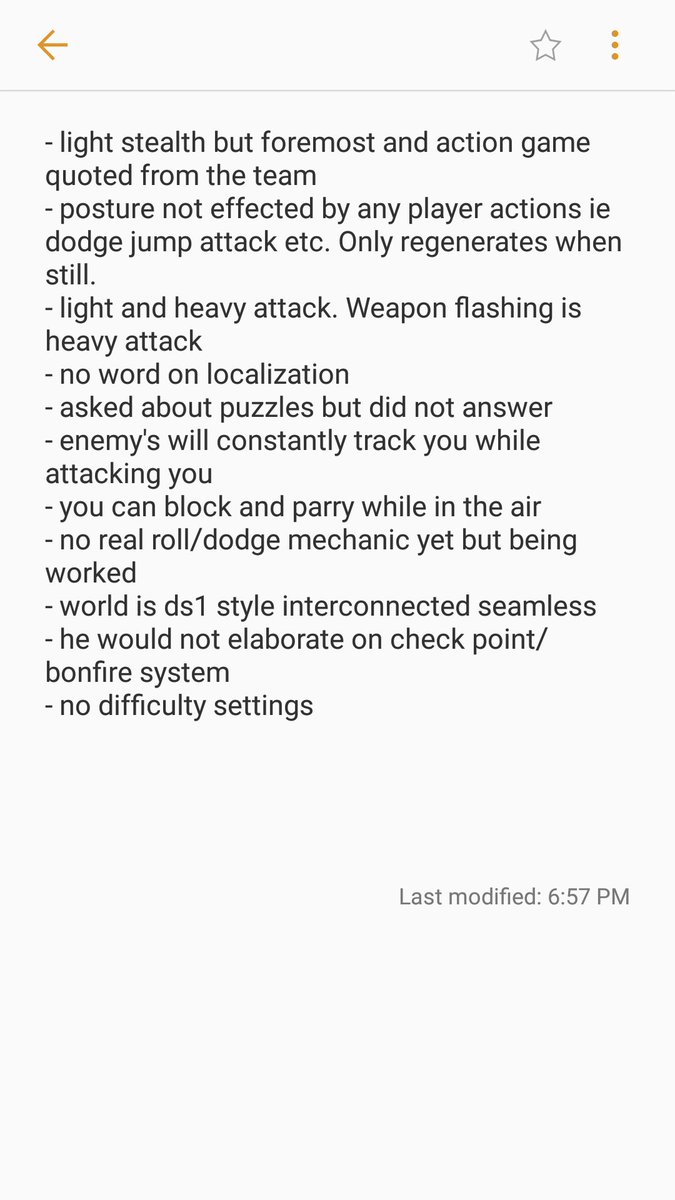 Royta wrote:Ooh! Nice :) If you ever want to co-op or whatever, let me know. The game has a really easy lobby system.

Will do. I don't like to summon unless I absolutely have to though. It feels like cheating to me. I only summoned on Ebrietas when I was playing Bloodborne. I still hate that dumb boss. Her final phase was such a bitch.

Nioh
Anyway I finished the first island so far. The game is a lot of fun, but I have to say I'm sick of RPGs. I hate all the stat menus and constant item pickups, armor swapping, running out of elixirs, over encumbrance blah blah blah. Makes me more excited for Sekiro and DMC5, just a straight up action title. Anyway, the KI Pulse system is interesting, and it took me a long time to finally get the hang of it, but it's pretty fun. I don't know when to change stances though, so I usually just put it on high and use brute force to win

I'll figure it out though. I also chose the spear as my starting weapon, and I think I hate it haha it does a good amount of damage, but I would much rather be swinging a sword. Thought of using the tonfas for some NG2 action as well. What are some fun weapons to use? And do you have any general tips? I went into this completely blind and sometimes it feels a little overwhelming. It's definitely different from a Souls game.

Sekiro
The flashing Kanji system sounds a bit iffy to me, but I'll keep an open mind. Happy to hear the DS1 world design is making a return! We'll see if they can top it. Otherwise it basically sounds like action-Souls with more general combat depth.

- don't bother upgrading gear, soul matching gear or whatever until you get Etheral Armor (Orange of color). You don't get this until your fourth(!) difficulty. You might have do reforge some Divine (green) gear once you get it on your second playthrough, but until then gear is more 'a nice extra'. Just equip what you think looks nice or has a shiny stat on it. I generally just equip some new armor at the start of each zone, or sometimes after a few missions.

- the weapon tiers are a bit weird, since eventually nearly every weapon starts to overlap, but builds do factor in on this. But generally its Lance >>>>>>>> katana = dual katana > odachi > axe > tonfa. The lance is by and large the overall best weapon, the only thing it lacks (sort of) is the nuking power of the swords.

- invest into Ninjitsu and Magic, you'll find hairlocks throughout the game and should aim to always have them at 20 points at least, you'll need them. Lots of good spells and buffs.

- generally the game just falls apart on Way of the Demon/ Wise difficulty since they added so many new stats and modifiers you can just nuke things to hell and back. Don't worry about this, just enjoy playing. Stats tend to also make other things pointless, such as Ki and Kipulsing. My main had so many modifiers I could just mash for years and nothing would happen. When I say a person beat the 999 floor Bloody Palace in 3 days by just one-shotting each boss on the highest difficulty, I am not joking.

- sheath moves are really powerful, and you can autosheath your weapon by tapping the ranged button, or via a way to complex input that people like to talk about but I personally find super pointless.

- focus on buying FLUX I and FLUX II once you can, really opens up the stance dance system as it means you get more ki back if you change stance during a ki pulse.

- stances are situational. For instance Low is great for fast hits against small targets and styling, but generally single target. Mid stance is usually horizontal sweeps (great for groups) while High is great for single target nuking, but is slow. Most players stick to Mid, but honestly try and switch it up; you'll enjoy it better.

- the tonfa is personally the most fun weapon, but you need most of its skills to use it honestly, otherwise it will probably feel lacking. The katana is very focused on Iai, while the Dual Katana is more focused on Sign of the Cross and its parry's.

- most enemies have weaknesses, aim for those (such as horns).

- if a foe has two debuffs (like water and fire) he'll get 'Distroted' or 'Confused' (two terms, same meaning). This makes it so that they take extra damage, stagger from each hit and can't regain stamina. It is honestly way too good, and I mean WAY too good.

Nioh is all about holding yourself back. One wrong step in the wrong statscreen and the game breaks in half and you see a boss melt. One of the biggest flaws the game had was that people never learned how bosses or enemies worked. When the highest difficulty was added it only pissed people off since they couldn't dodge basic bosses they had probably killed 50+ times by then, since they'd just gotten past them using overpowered combinations.

In terms of Co-op, you can always play older stages together for extra cash etc. Get your grind on haha!

The Sekiro board and any topic on the PS4 board is non stop bitching about how this isn't a Souls game. Some of these topics are really showing how stupid gamers are.

My fav is people believing this is Souls with everything removed. They have no idea that From made action games in the past.

D-Rank
Posts : 65
Join date : 2018-04-28
The biggest misconception soul fans have is they believe their games are difficult, in reality, they're simply trial and error, although you could argue every game falls into this category. Aside from handicap runs the soul series is overrated for its 'difficulty'. I have been streaming the remastered version on PS4 and have had barely any issues, apart from OP invaders.

Admin
Posts : 5465
Join date : 2017-07-01
Age : 33
Location : Netherlands
It is mostly the marketing. Once you know the tricks the series has, the only difficulty left is knowing the moves of enemies and downloading them into your brain. I remember in Dark Souls 3 I'd gotten really tired of it as each boss meant "welp, time to die a few times to figure out the moveset" or sometimes I'd just derp my way through. Painful.

Really curious to see how this will play out.