A-Rank
Posts : 582
Join date : 2018-12-24
I played the first stage so far co-op with my GF. I kept it to normal, just to have a good time. It has 3 difficulty modes and a 4th unlockable. If you are a Suda fan, you will love this game. They are pulling in things from every game to make a single Suda universe. It is actually really cool. There is a lot of meta commentary here on making games and the players themselves. So far it has been really well done, it has gotten some good laughs as well.

Gameplay wise it is simple for sure. It is taking an indie approach to gameplay. It feels like a cool steam game that would have come out years ago, but with all of the charm of Suda. It has a light attack you can hold to just run around slashing. This feels a lot like a Shmup auto fire. There is a heavy strike you can use to knock back stronger guys. You can do attacks after jumping and rolling as well. Very simple but feels good enough. The main gameplay variety comes in skills. Off the bat you get a force unleashed style grab. You can throw mooks or your partner into other enemies or yourself. You can also hold the enemy in front of your buddy and have them wail on him. There is no friendly fire, but you can slow or knockback them on accident.
I like this it adds to the chaos but doesn't feel frustrating.

I will update more as I play, but so far I would highly recommend it if you like Suda and have a co-op buddy.
I wouldn't recommend it solo.

Played the whole game on Bitter lvl 1 with a friend(that was months ago so no dlc), the gameplay is really simplistic(basic moveset, no real deep tech or cancels) and I'd say it's kind of bad if you're expecting a HnS but decent if you see it as a platformer rather than a full blown action game.

Light attack is useful for hitting dangerous mobs that move a lot but is pretty garbage to do damage, heavy is your best move to deal damage aside from chips but it's slow animation makes it hard to be used on mobs that move around a lot, aerial attacks don't see to have any real utility(light at most can be used to close distance fast, haven't found any real uses to air heavy).

Chips are varied and have some cool interactions(one of them creates smoke screens that can be blown by certain skills like lightning, the grab one has collision damage, aoe beams that can be charged for insane damage that will go well with CC chips, etc), I just wish they were tied to meter instead of cooldown nonsense as low level runs end up boiling to "run around until you can spam chips, rince and repeat"(who could see this coming rite). Something they did right with chips though is the fact that you can change then at any given time(the only real penalty is that they're on CD when they get equipped) so it means that you can find a use for nearly all of the chips in the game even if a few of them are clearly better than ones.

Haven't tested difficulties to see which differences they have aside from obvious stat padding so I all I can say is that lvl1 runs are a massive drag since everything becomes insanely tanky in the latter half of the game and require you to rely on chips to do any sort of real damage(bosses are spongy too but they are really fun to fight unlike regular mooks), the difficulty feels average if you level up properly but L1 runs are pretty brutal if you're playing solo(co-op breaks the game). Haven't tested Spicy difficulty yet since it wasn't my game.

Bosses as expected from Suda games are all unique and pretty fun to fight against, in fact I'll go as far to say they're the best gameplay aspect of the game from far and I even like the bosses from this game more than the ones from the main series, they're definitely way harder than NMH bosses and all of them are packed with different moves and phases that you'll need to find a way to dodge it constantly or get rekt.

Co-op is sort of weird, it clearly feels like the game was designed to be played with co-op(going as far as to make every chip inflict it's properties on your co-op buddy but no damage) but it has weird flaws like the ressurrection system during co-op making it impossible for players to die, the platforming segments on the third stage being massive cancer because platforms can't properly fit two players and the respawn system if you fall down teleporting characters back and making them lose a lot of progress if someone falls. As noted, the "friendly fire" mechanic is properly done and save a few exceptions like lightning following pathing to hit your buddy, none of it turns the game into Magicka.

A-Rank
Posts : 582
Join date : 2018-12-24
That sounds about right, I wouldn't want to do a lvl 1 run if it is that tanky. I really do like switching skills out whenever, that is a good system.
Gonna play some spicy solo when I unlock it. 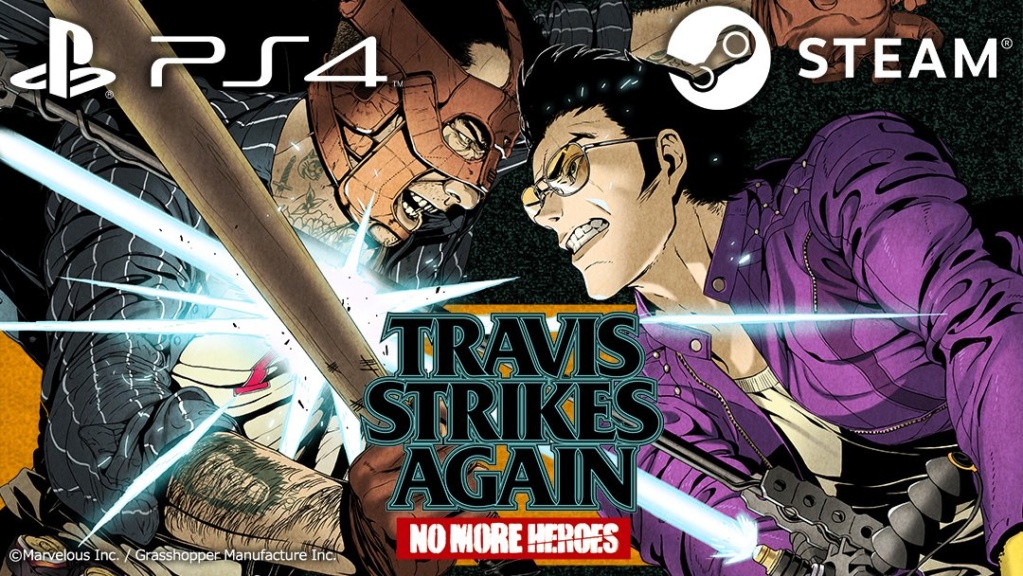 A-Rank
Posts : 582
Join date : 2018-12-24
Progress on this has been very slow for me. This has to be the worst playing Suda game I have played bar none. The depth is almost non existent, avoiding damage seems like down to luck, it just feels like a generic steam coop bralwer. It's ok. But most of his games have some really cool ideas in the gameplay department, and usually have a fun enough combat loop.

The best thing this game has going for it is everything else. The writing, story, music, and the graphic novel sections in between the fighting are fantastic. So that's it.
Slog through a boring mindless brawler to see some incredibly funny suda meta commentary on game dev. Worth it if you are a huge fan of his work and history, but it is a tough pill to swallow.